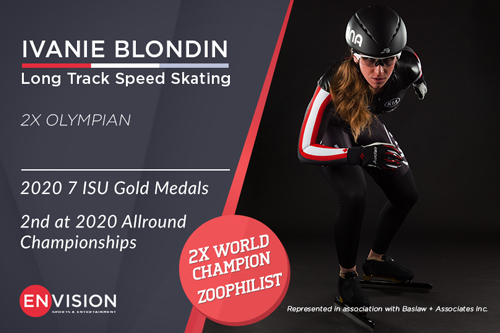 Canadian Ivanie Blondin made her Olympic debut at the 2014 Sochi Winter Games after learning to skate when she was just 2 years old. Whatever she lacked in gracefulness, she made up for in power and speed. When she was 6, her frustrated figure skating coach suggested her parents get Ivaine into speed skating and they’ve never looked back.

Coming back from the Pyeongchang Olympics empty handed, Ivaine was devastated but she has persevered and 2020 was Ivanie’s most successful season yet with 12 World Cup medals and a world championship title. Despite less than ideal preparation as a result of COVID-19, Ivanie travelled to the 2021 ISU World Long Track Speed Skating in Netherlands where she won two medals. She will head into the Beijing Olympics as a medal favourite in four events.

Off the ice, Ivanie finds purpose in fostering animals and spending time with her partner Konrad.