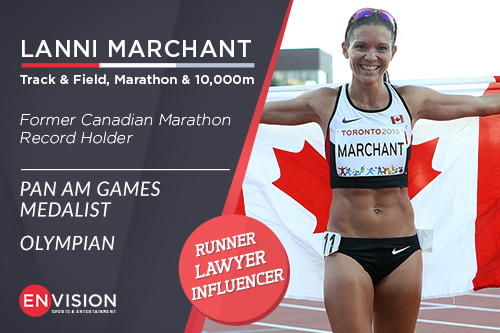 Lanni Marchant represented Canada in the 10,000m and marathon at the 2016 Summer Olympics, becoming the first Canadian athlete to double up in these two grueling events. She won a bronze medal in the 10,000 at the Pan Am Games in Toronto the previous summer.

Lanni is the middle child in a family of seven. Her mom was a figure skating coach, but in grade 10 Lanni traded in her skates for running shoes after finding joy and success racing with her high school cross-country team. The London, Ontario athlete earned a scholarship to the University of Tennessee at Chattanooga, winning multiple conference championships and several other titles on the track and as a member of the cross-country team.

Lanni attended law school at the University of Ottawa and Michigan State University. It was during these years that Lanni discovered success in road running. In 2013, Lanni broke the Canadian marathon record and a year later, did the same in the women’s half- marathon. Lanni has overcome a series of illnesses and major surgeries that tested her mentally and physically from 2017 to 2020.

Using her passions for running and the law, Lanni is a dedicated athlete advocate having testified in front of Canadian Parliament Heritage Committee on Women in Sport and successfully lobbied our government to increase funds aimed towards growing and supporting women’s sport in Canada. Lanni is an active member on the board of directors for the Sport Dispute Resolution Centre of Canada, sits on the SafeSport Work Group with AthletesCan, and is an athlete council member for Athletics Canada.

Lanni’s dedication to sport is only outdone by her passion for her dog Elle and her love of burgers and beer!