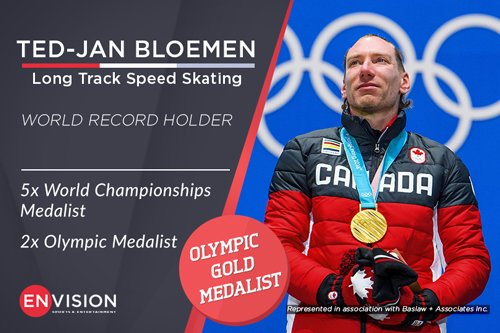 Ted-Jan Bloemen is the reigning Olympic Gold medalist in the 10,000m. He won a second Olympic medal with a silver in the 5,000m at the 2018 Games in Pyeongchang. Despite limited access to his regular training facilities in Calgary due to COVID-19, Ted-Jan still made it to the Netherlands for the 2021 ISU Long Track Speed Skating World Championships and one a remarkable three medals.

Bloemen first represented his native Netherlands on the World Cup circuit in 2007-08 and spent eight years in the highly competitive Dutch system but after not qualifying for Sochi 2014 he knew he had to make a dramatic change. So he relocated to Canada, his father’s birth country and immersed himself in a new training environment in Calgary.

With a new passport in hand and new-found optimism, he joined the Canadian national speed skating team and made an immediate impact, helping Canada win team pursuit silver at the 2015 World Single Distances Championships. This medal was an early sign of what was to come. The following season, Bloemen took the international speed skating world by surprise, breaking the 8-year old 10,000m world record at the World Cup in Salt Lake City. In doing so, writing history as the first Canadian 10,000m world record holder in speed skating’s grandest event.

The Calgary based speed-skater draws on the support of his wife and young daughter as he prepares for the Beijing 2022 Olympics and the opportunity to add to his Olympic medal haul.