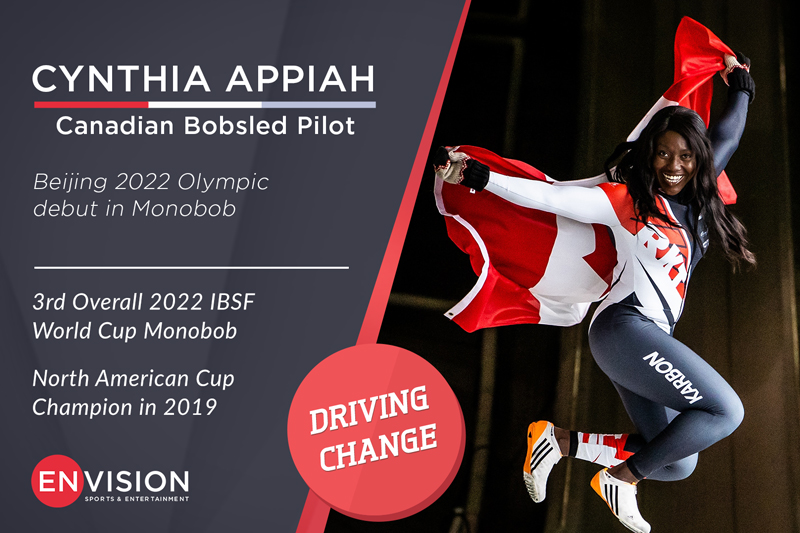 Cynthia Appiah is a celebrated Canadian Bobsledder, capturing a Crystal Globe during the 2021/22 IBSF World Cup season as the 3rd ranked Monobob pilot in the world.

Starting her career in the back of the sled, Canada’s Cynthia Appiah had an outstanding rookie season back in 2015/16 as a brakewoman. She pushed two-time Olympic champion, Kaillie Humphries, to a gold and bronze medal at the World Cup and backed rookie pilot Alysia Rissling to her first ever World Cup bronze medal. After being named an alternate for Team Canada at the 2018 Olympic Games in Pyeongchang, South Korea she decided to switch positions from brakewoman to pilot and has been in that position ever since.

Cynthia’s strongest event has become the Monobob. She claimed two victories in the event in 2019 and finished 5th at the 2021 World Championships. Appiah would go on to have a breakout campaign during the 2021/22 season, capturing her first World Cup podiums as a pilot (a silver in Altenberg, Germany and a bronze in Winterberg, Germany) which helped her to earn a coveted Crystal Globe. Cynthia made history by competing in the Monobob at Beijing 2022, sharing an Olympic debut with event. She would finish 8th in both the Monobob and 2-woman events in Beijing and looks to build upon her experiences as all eyes turn towards Milan Cortina 2026.

Despite being the victim of occasional racism competing in a sport where black pilots are rare, Cynthia has persevered and maintains a positive and hopeful outlook for the future. Appiah’s journey toward a life in elite sport began through a Jays Care Foundation outreach initiative where children from under-privileged Toronto neighbourhoods are invited to learn to play baseball at a local park. Cynthia’s parents immigrated to Canada from Ghana and she’s exceptionally proud of all that her family has achieved. She’s never allowed living in Toronto Community Housing to define herself or her family. Cynthia looks to inspire all kids growing up in difficult circumstances to chase their dreams even when they seem impossible.