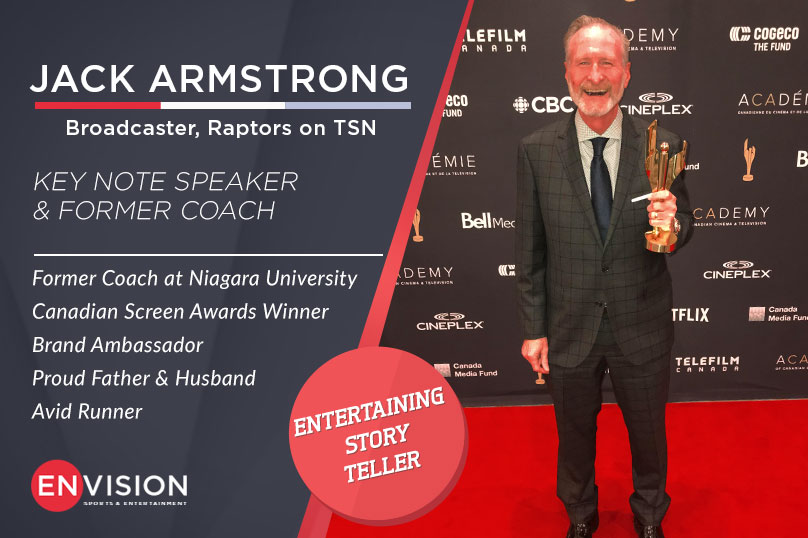 Jack Armstrong’s experience as a coach, broadcaster along with his unique family experiences gives Jack a unique perspective on sport, team building and life.

Best known as the colourful and entertaining voice of the Toronto Raptors, Jack has spent 120+ days a year covering the NBA and College basketball for TSN and NBA TV. His broadcast work has earned him multiple Canadian Screen Awards and helped an entire nation fall in love with Canada’s basketball team. Before becoming a broadcaster, Jack spent ten years as the head basketball coach at Niagara University where he was named Division I New York State and MAAC Coach of the year for the 1992/93 season.

Prior to his time at Niagara, Jack served four years as an assistant coach at his Alma Mater, Fordham University (Bronx, NY) where he also earned his BA in History and an MA in Public Communications. Beyond basketball, it’s the 56 year-old Irishman’s family experience that has helped shape his view of the world. Raised in the Brooklyn, NY along with his three brothers, Jack lost his father when he was just seven.

Later in life when Jack and his wife Dena found out they couldn’t have children of their own they decide to adopt three young boys. Through their adoption experience, they learned that there was a disproportionate amount of African American children in the foster care system and decided to welcome welcomed three young black boys into their homes and hearts. An avid runner and tennis player, Jack believes that anything is possible and brings his energy, coaching philosophy and kind heart to everything he does.